At the inaugural festival..the first one that started it all...

What  a wonderful way to spend a Sunday. I was asked quite a while ago now, if I would bring along some of my work to this event, for artists, makers and artisans to show what is made within a ten minute walk from where we were, Grahams Place, High Street, Wollaston. Some in smart workshops, others in sheds and front rooms, all sorts of people, making all kinds of things.

So when I was asked I though yeah okay, why not. I'll try anything once. It was free for me to get a pitch, no cost what so ever. And the few days before were cold, very cold and lots of snow...

On the morning I got to my workshop around 9am, and started carrying things into the doorway to get them ready to go. I couldn't find my black cloth that I use over tables to make everything stand out better, and searched high and low, but no luck. Anyhow I was ready and so was Vic Bamforth, the glass artist down the corridor from me, and we left at the same time.

To the show, oh yeah, about 3 minutes in the car. Then out again, there was still snow on the ground and all over the car park, but it wasn't too bad. Then Vic and I walked into the marquee to see what was going on and where we were. For Vic there was table set up, I grabbed a table and started to set up not far from the doorway, where I was asked to pitch.. (next time if it's cold... a bit closer to the heating). By the way, the heating wasn't on at first, but once the problem was solved, it was on by opening time 12:00 midday. And there was a trickle of people coming in, and it was pretty good, more people came in and then the live entertainment started and the place started to fill up, it was going really well..

Twelve till five were the official opening times, and the people just kept coming in having a wonder round, buy the odd thing like cakes, then watch Merlyn Farwell blowing some glass on The Stourbridge Lion. 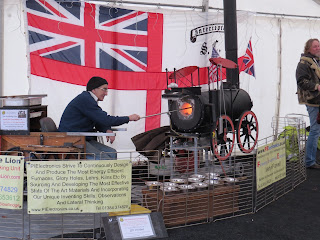 This was a Glory hole and Lehr on a carriage that looked wonderful and worked great, he just sat on his seat and blew glass for hours, entertaining folk as they stopped by. 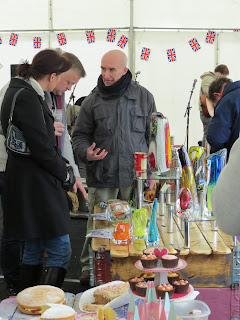 Here's Vic Bamforth, going through the process of how he makes his glass pieces with a visitor,
see those cakes in the foreground, they all sold out.. 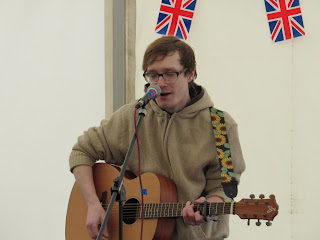 Not sure who this guy is, but he sounded great.
(if you know who he is, let me know and i'll put his name here) 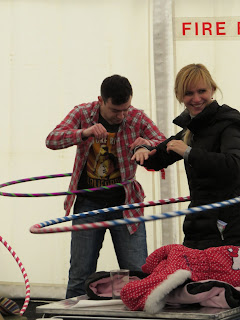 and Hula Hooping, lots of it, kept people warm, and prizes were given out... 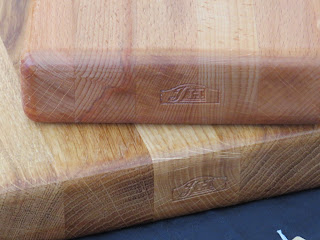 I took a few pieces and sold a couple of these cutting boards. 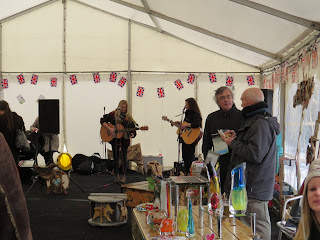 These girls were brilliant...
(if you know who they are, let me know and i'll put there name up here) 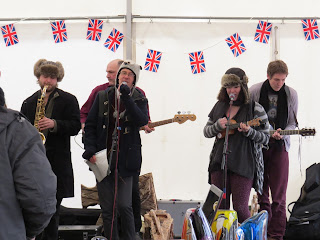 These guys were really good, I recognised a couple of tunes...
must be my age..
(if you know who they are, let me know and i'll put there name up here)

A good day, met lots of people from the area. There were others to that were selling pictures, photographs framed and others collecting for charity events.

Thanks to Bob Teal and Sam

I look forward to the next one..wherever it is..