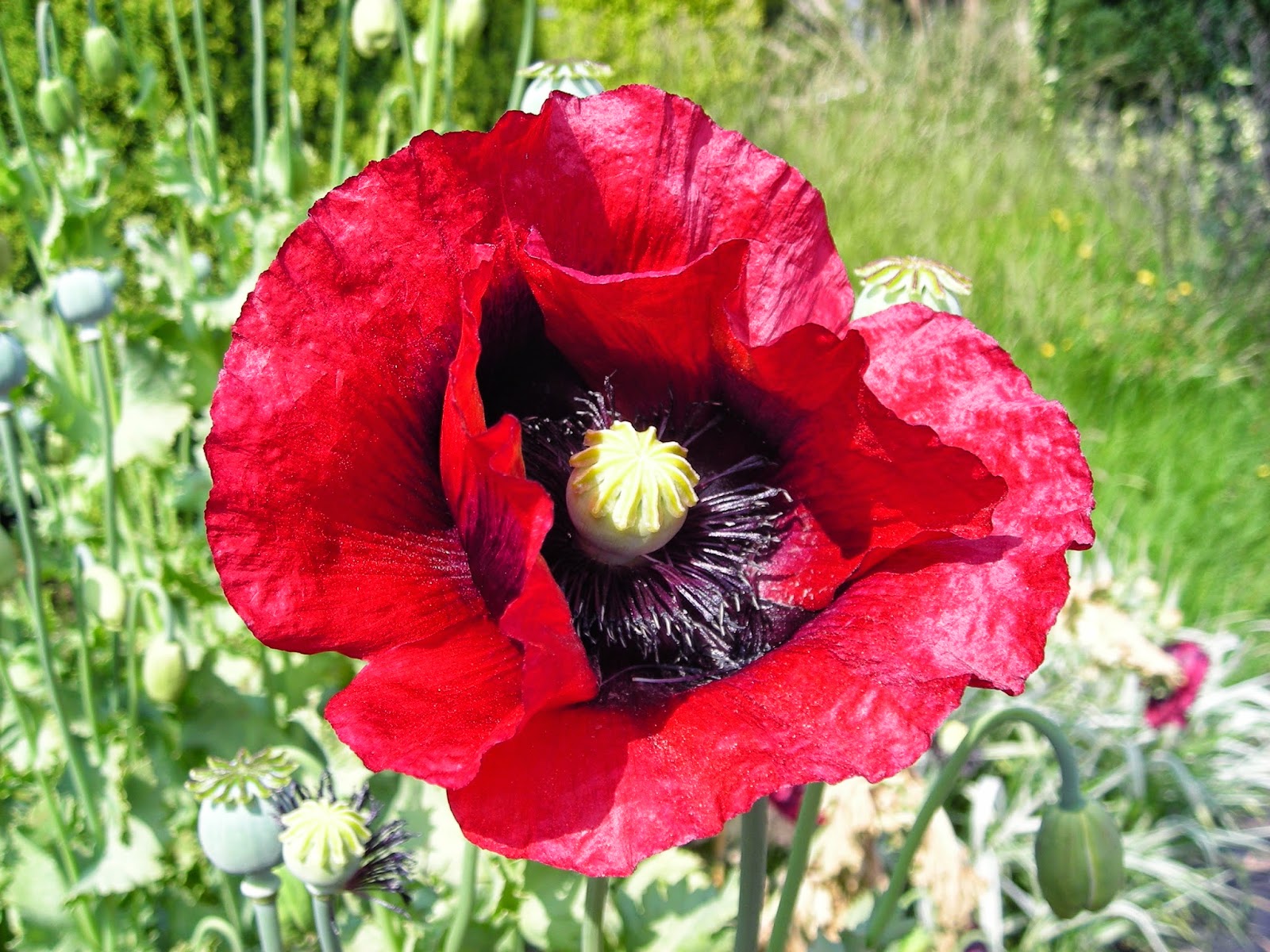 Invited because I, with young Tom Oakes (my apprentice for the next year) have built Oak display cabinets for the exhibition held in their beautiful Pugin chapel.

The initial phase of the exhibition focuses on the early stages of the conflict and the raising of the Birmingham City Battalions. Over the next four years the literature and artifacts will be refreshed to reflect on the anniversaries of landmark events and more personal stories of the 1,411 who served in the war.
So the cabinets will only be opened and 'set' occasionally, and the top 'Crest' rail is removable in order to slide in new panels. And simple, so that when you are viewing the artifacts, there are no distractions for the viewer.

Here are a few pictures from the opening night... 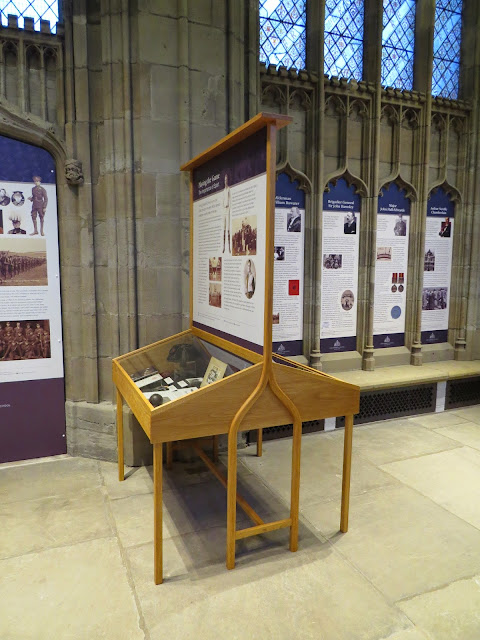 Firstly, one of the three Oak cabinets designed by myself and Simon Meddings.
Finished in traditional Button Polish. 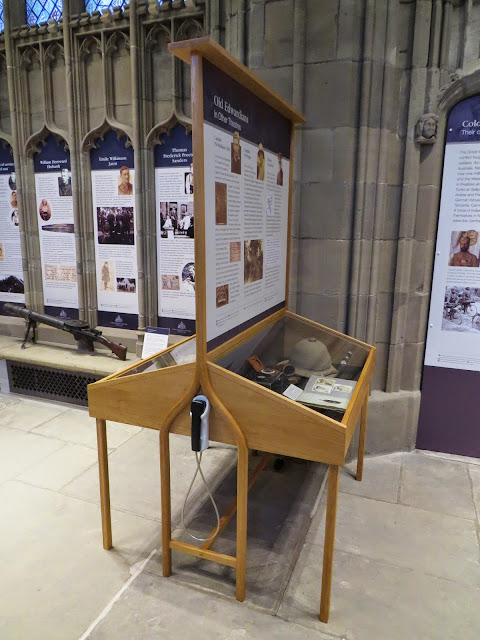 This one has an audio phone. notice the simple details and lines.
The cabinets have been thought through in every detail. 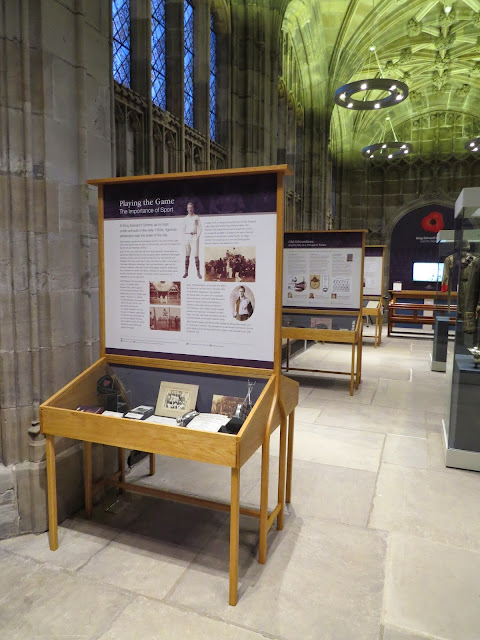 Looking down towards the Alter
The three cabinets back onto the three pillars. 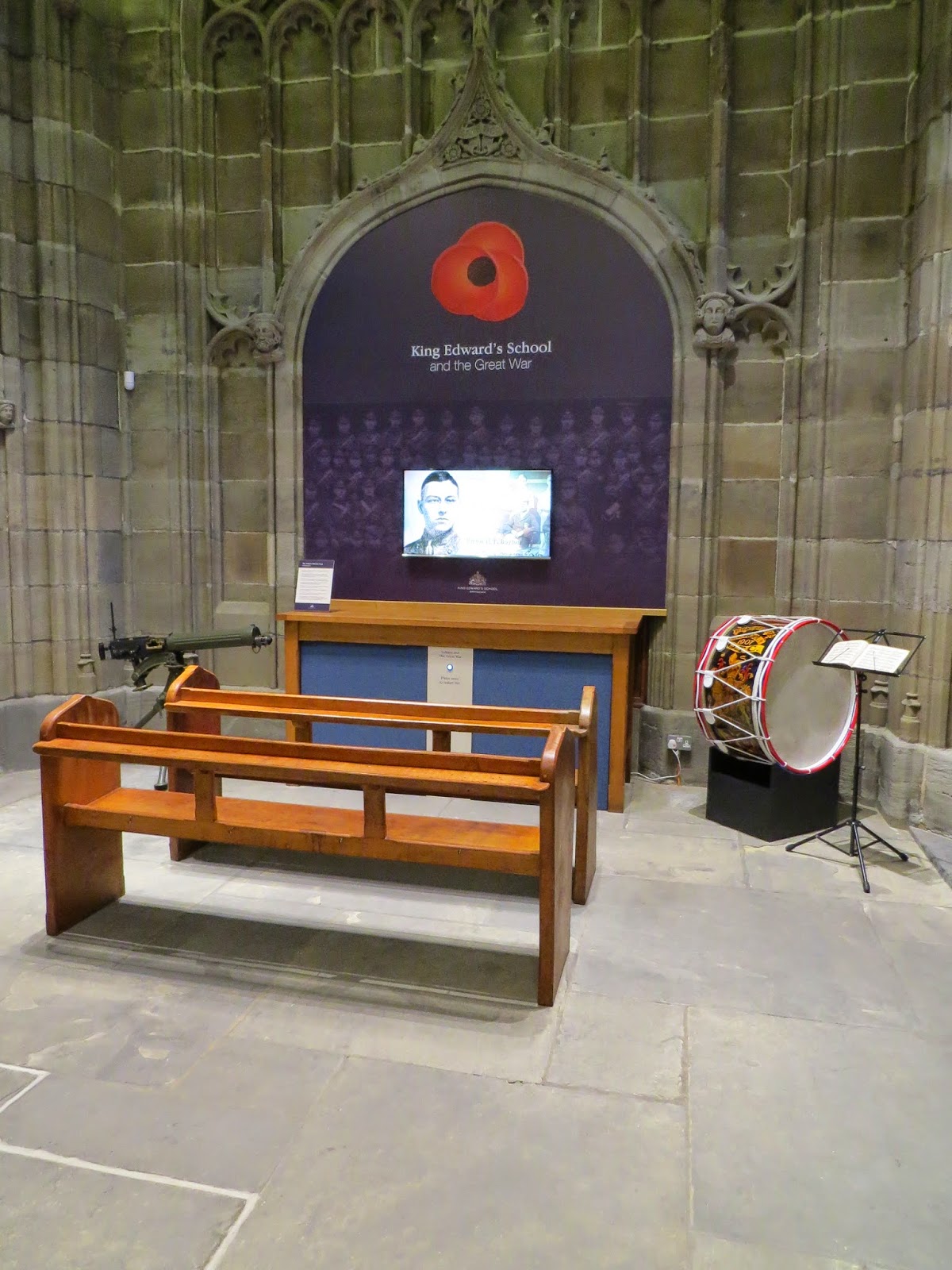 The Alter has been transformed into a viewing area and made more comfortable using two of the old pews from the chapel. This is all so well thought out.

During the evening the Chief Master introduced and pressed the button for the first time on the documentary film about the experiences of JRR Tolkien and his closest friends in and around the time of the First World War. The documentary was produced by Elliot and Zander Weaver, both Old Edwardians, I learn't so much from it, so compelling... It was quite hard to watch at some points, what the soldiers went through was terrible.

Zander and Elliot, you have done your school proud.

After viewing the documentary, I chatted with the Chief Master, John Claughton who beat me to it when he said that Pugin himself would have designed the cabinets with that detail if it could have been made in that way. He also told me about  some other Pugin work within the school that I would like to see. Very generously he was willing to show Tom and I around parts of the school to see some stunning work.. It was beautiful.
Then it was a short walk to the performing arts centre for a reception where drinks and canapes were served, with a warm welcoming speech from the Chief Master, who then went on to tell more details of the guests. Including a lovely anecdote about my viewing some of the Pugin furniture just ten minutes before and some very complimentary words about the cabinets. 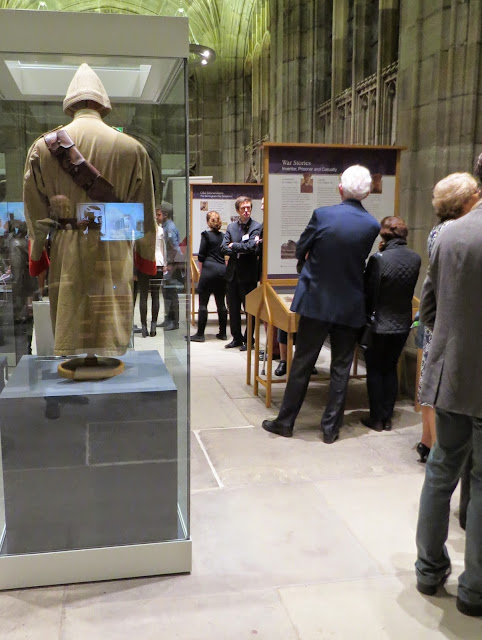 Quite a few comments from the guests on the cabinets were welcomed by Tom and myself.

When Simon Meddings and I had our first design meeting in this beautiful space, The curved lines of the Equilateral Arches or  the 'Ogees' were wonderful and I felt that we had an opportunity to use this wonderful feature in the design. We needed legs and some timber rising in the centre section to hold the panels with all the information. The design you can see in the photos was going to happen, with lots of laminating... We agreed that we should use all of the vertical lines in the stonework, mullions and leaded windows, and bring those lines down onto the York stone flags..

I needed to add some structure to the bottom of those centre Arch laminated legs. So I suggested they share the same layout with rails and stretchers as the Alter table.

Simon can seriously draw well, so as I was rough sketching ideas, Simon was making the sketches look wonderful, to better scale and perspective. I can see it in my head, but getting it down on paper is not as easy as I would like.. More practice for me then...

A lot more to follow as I sort through the photographs.