This lovely camera came into my workshop on the last day of my exhibition..

Jo had been taking photographs with it in the courtyard in the centre of our site. When there was a gust of wind, and it toppled over on its tripod and went down to the ground. One of the tech guys had been to see my exhibition a few minutes before and handed my business card to her and said this guy could probably fix it. When Jo brought it in to me she put it on one of the benches with just a few screws.. we discussed for a minute. I then asked my Chloe to go with Jo and see if she could find any more screws, as there were loads missing from the bent up brass-ware. Chloe came back with even more, which was great as they were really tiny.

Well, I'd not done one before, but it was brilliant to get my hands on it and take it from a pile of bits back to better than it was before..


Here are some pictures and details 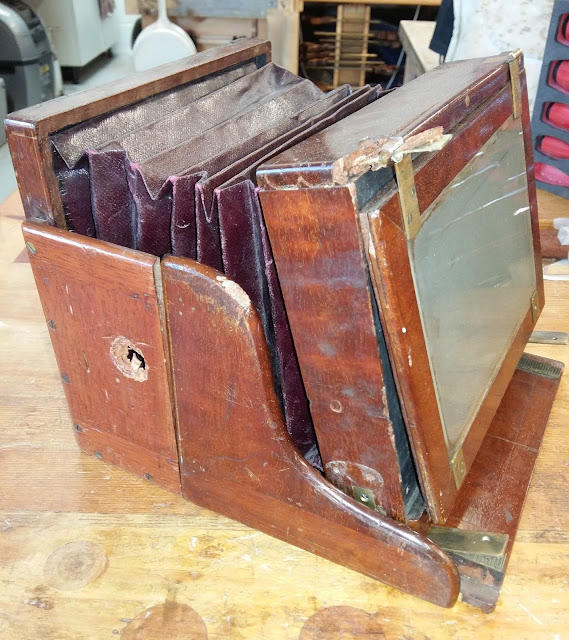 This is how I first saw this wonderful old camera.
Just look at it closely, hinges ripped out, brass metal runners bent up, ripped out screw holes everywhere.. Mahogany just badly damaged. Tiny dovetails split out and ruined.
The only really good thing was the lens was not damaged at all.. and luckily the rear glass plate had not got damaged or the lens suffered too.. I know, after falling from over a metre off the floor (Tarmac) !! amazing really. 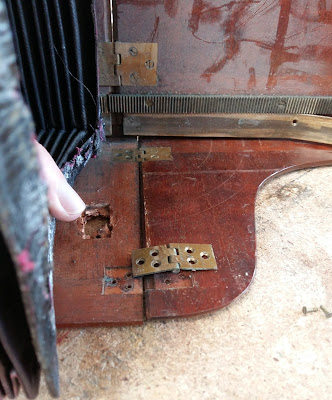 As I mentioned earlier, I have never really had my hands on one of these in good condition, so to have one broken and not really sure how it all works, was a little scary.

But all I had to do was only problem at a time, and the woodwork was without doubt the only place to start.

The photo to the left shows the hinges on this side piece were very slightly bent, it didn't close at all, and I could'nt just force it. It was about taking steps backwards to move forwards. These hinges had to be straightened up by 1mm. Then it worked.


Notice too. The bent piece of 'guide' brass in the background these were bent and screws ripped out of holes. Each piece of brass removed, straightened. The holes filled and re-drilled, then all screwed back together. 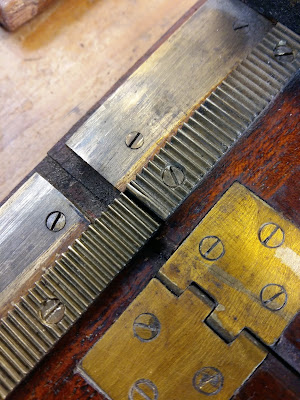 This part I was lucky with. Notice the first gear on the end of the rack right next to the hinge. See how it was bent over. Well the pinion would not go over this part, so I took it off, turned it around and..
hey-presto it worked, even the screw holes were in exactly the right place.

The hinge here had to be removed later on as it was slightly bent too.

The guide piece is to the left, this was before polishing up. Polished up not just to clean and look shiny, but to get years of grease and muck off it.

Notice to the left and right of the hinge, that the Mahogany is beveled at 45 degrees to allow the hinge to work correctly. Dont forget the rack and pinion has to still work running over that joint. A great piece of engineering. 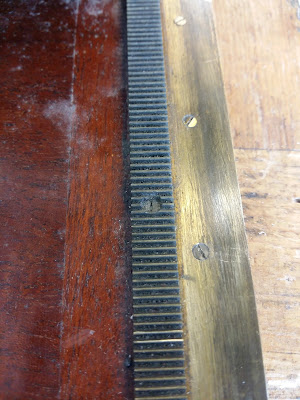 This is the before photo of the gearing for the rear part of the camera to mechanically move to and from the lens.


Notice all of the dust and oil in between the gears. 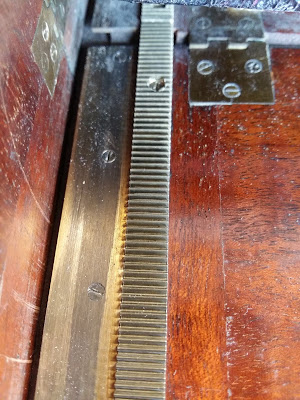 Here's the opposite side after I have cleaned the gearing out, straightened the brass strip, filled any of the screw holes that were ripped out, and re-fitted the screws. And there were 27 screws 'ripped out'.

Each had to have the hole filled with a small slither of wood, glued into place, trimmed flush and then the brass pieces screwed back on. A time consuming job, but one that needed to be done properly. 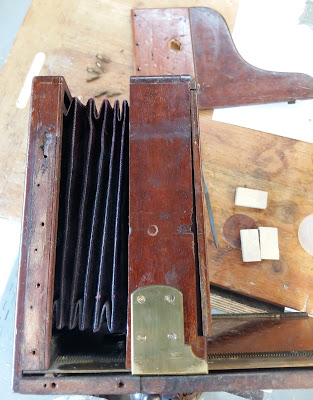 
The brass plate in the bottom of the shot holds the moving carriage, this was bent all over the place. I clamped it up between two pieces of wood with leather to stop any damage to the brass patina.

You can clearly see now how the brass end plate tucks under the brass runner plate. The knob on the other side (out of shot) turns the pinion, this engages with the rack and slides fore and aft. 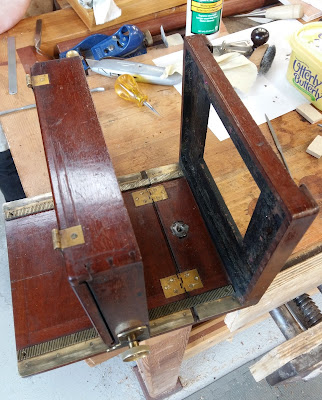 This was after I had removed the bellows. They were


I couldn't understand why the carriage part was not working its way to the front of the camera.


Then I noticed that 'T-nut' in the base was catching the bottom of the carriage. It was about 2mm proud of the surface. It had been added so that the camera could be used on a tripod. 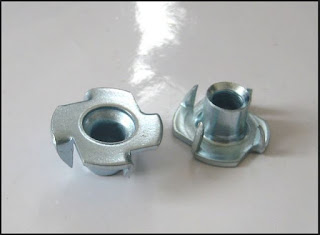 This is what a T-nut looks like, very useful. 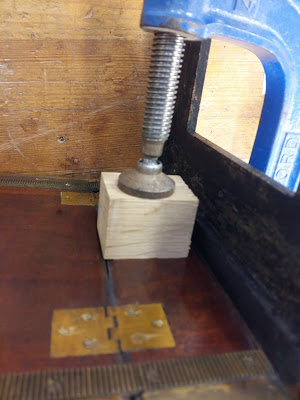 I removed it carefully.. wasn't easy as it was clamped in and some glue was around it.. and those barbs really do grip well.

Anyhow I recessed it in another couple of millimeters then clamped it back in the same barbed holes. Careful that it couldn't come through the base.

Here it is with a hardwood block on the inside... 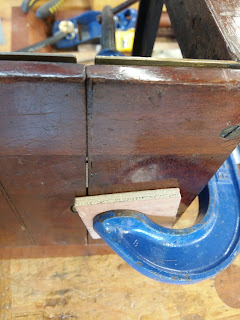 ..and a softer ply pad on the outside to protect the Mahogany 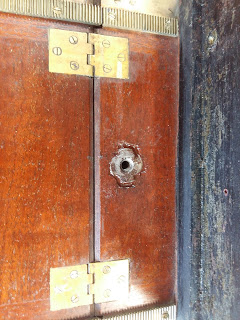 The hole was already a bit chewed up. So I was doing my best to keep it as tidy as possible.


I put some epoxy mixed with some Brown pigments to fill the hole and to provide a little more support. 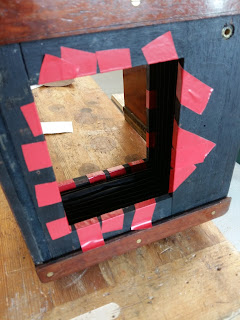 This is after I had refitted the bellows, the red tape is just temporary. 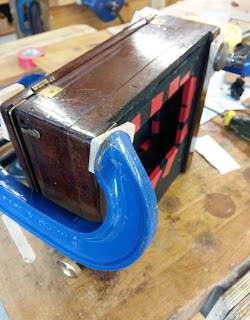 This was to hold the two parts together while the bellows dried overnight.


After I had repaired the remaining woodwork problems, I gave it all a clean down with my reviver. After that each piece of the woodwork was given at least two coats of French Polish 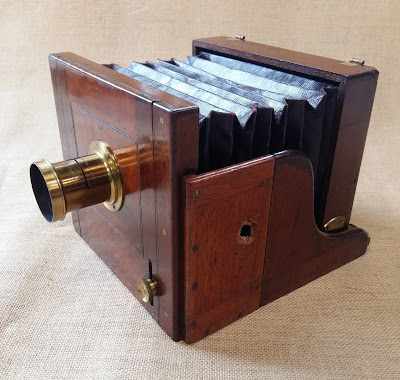 Here is the completed camera..
the remaining hole you can see on the side could be repaired at a later date. 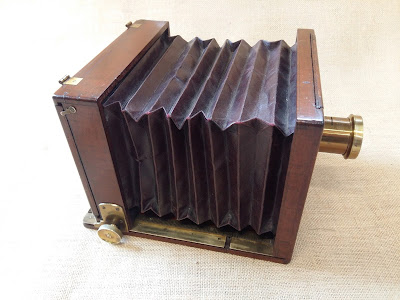 The list of repaired parts is a long one,, but it works a treat
Wind that knob clockwise it turns the pinion and travels towards the lens,, 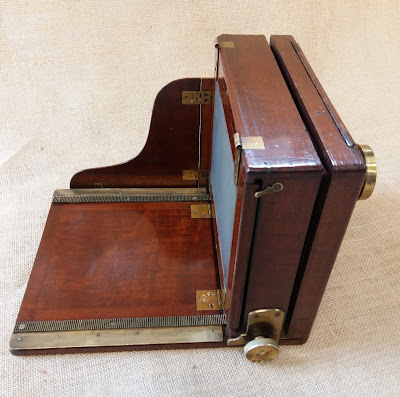 Like so..  Now just lift the far left part up towards the top of the carriage part,
then close the curved part. 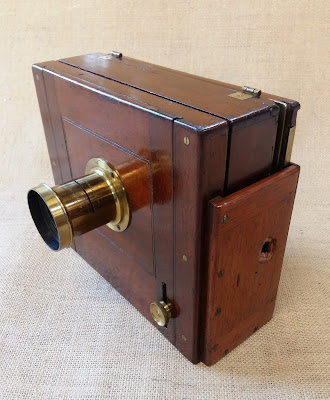 Ends up like this. There are some well made, and well thought out catches too.
The catch that holds it all open, also works to hold it all closed. Very well engineered 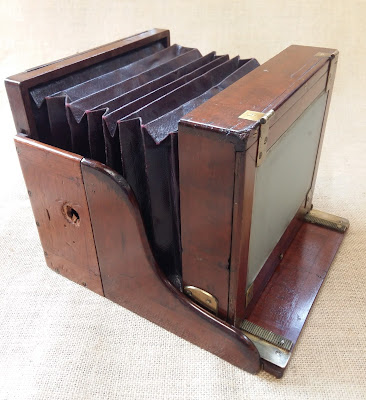 Here's the back corner,
I didn't fill the damaged wood, just glued the splits and realigned them as best as possible, with the clean and polish it looks as naturally looked after as it should after 155 years.


The finished camera looked great. And Jo was really pleased, because it got a lot more than just repaired, it got a full service too..

I really enjoyed it, and would love to do another.

Thank you for your efforts to preserve a great piece of historical craftsmanship.

Thank you for looking. I could work on these all day, brilliant engineering, wonderful small jointing of the Mahogany.

It's great to see old world craftsmanship put into action! That camera is a part of history and to watch you put it back together pretty much from scratch was unbelievable. Refinishing all of the woodwork, in itself, was an amazing transformation! I'm so excited to see that there are still masters of their craft out there!

I am really impressed by your blog.Hope you will do more better in future.
build arcade cabinet

Those are lovely cameras, you have done a great job.

This is just a fantastic post. What brilliant work Jamie, and a real pleasure to read what you did, why and how.
Absolute joy this is. Superb Jamie